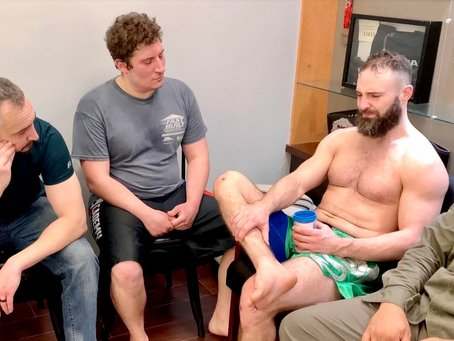 This went on for weeks on end, until one day, I found myself at Lightning Kicks, my second home, and was on the verge of falling asleep. All the late-night chats were finally taking its toll on me, and I found myself half asleep and half hysterical. However, all my lessons in warfare and pain management gave me the assurance that I was a warrior and I was ready for the battle and the blood on the horizon. Even though I thought about sitting it out, telling Amir that I needed a day off, something inside of me was telling me to endure and not listen to the voice of doubt inside. As we began stretching to start the class, Amir played for us a short message on the importance of pain, suffering, and enduring whatever life throws your way. I looked over at one at the others in the class and told them I had a feeling we would be pushing our limits today. And so, we did, and the pain commenced.

This was certainly one of the most ruthless practices of my life. It was like two wild dogs pitted against each other to see who would quit first, who would tap out. One drill after another to escape a bad position, to scramble to get the better position, to get the takedown, to get back up, and to take your opponent back down. It was most certainly a dog fight, a fight that I was convinced I did not have the endurance for. I was utterly exhausted with no gas left in the tank- at least that’s what I thought. But I made a conscious decision to no longer think about it. The time for thinking was over, and all that was left was the joy of being alive. So, I executed each drill as if I hadn’t a care in the world, as if I was as light as a feather, and I refused to listen to the doubt and fear inside my head. I hit the override button and saw the workout through to the end.

The last bell went off, and the practice was over. I had endured. I walked over to the side of the mat and slumped against the wall, a sweaty mess. My classmates were trying to talk to me about the intensity of the class, the battle that we shared, but I was lost in my own mind. I had endured, I told myself. And I thought about the past two years of my life, of how I was convinced that the pain I went through was more than a human being could ever bear, but yet I endured. And I thought of all the days at the office where I worked through massive panic attacks and flashbacks, wishing that I were dead, but I had endured. And I thought of that day where I was sitting in my car ready to drive home and kill myself until Amir’s voice reminded me that I was lying to myself, so I had endured. I sat there within the sacred walls of the space that was making me impenetrable, and I realized that life had thrown at me the very worst it had to offer a human being, and somehow, I was still alive, breathing, and moving forward. I had endured.

The thought of it all was too overwhelming for me to withstand, and I began to weep. I buried my head in my shirt so no one could see me cry. Everyone continued to talk to me, and I gave them short responses in hopes that they wouldn’t notice I was losing control of my emotions, but they did in fact notice. “What’s wrong Aaron, everything OK? It was a pretty crazy practice today.” I took the shirt from my face revealing the redness of my eyes and my tear stained cheeks. I decided that I had been through absolute Hell, and I no longer cared if grown men saw me cry, and I told him that I was just so proud of myself that I didn’t give up. I told him that I was so proud that I knew that I could withstand whatever life threw at me, and I thanked him and Amir for never feeling sorry for me and never letting me quit. And they embraced me like a brother, and I cried in their arms.

After practice was over and everyone left, Amir asked me to stay back with him and talk about what had happened that day, and I told him everything. I let everything out: my ghosts, my journey through Hell, the Boy, the War Machine, and the PTSD. And I told him that I was so thankful for the example he set for me of how to be a man who withstands whatever the world may offer. He looked back at me as if he didn’t deserve such accolades. He told me he felt like a hypocrite, and that he had some secrets of his own, and that he was familiar with the struggle. I could see it in his eyes. He knew. We both knew, and together we would carry each other’s burdens. – Excerpt from Capturing the Ghost by David Tanner Lauka