BJJ in a Girls World 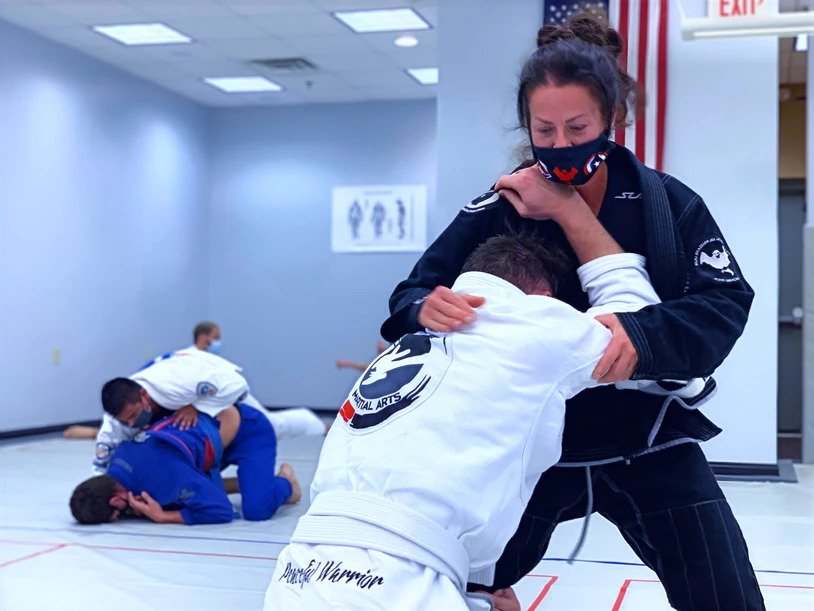 I signed up for Jiu Jitsu in late January of 2020. Finally. Jiu Jitsu was something I had thought about and wanted to try for at least 4 or 5 years but I never got farther than the initial Google search of, “Brazilian Jiu Jitsu near me.” It would be a lie to say it was because I was too busy at work, or too busy with three kids, or too financially strapped to afford it. None of those relatively legit reasons. Plain and simple- I’m a big chicken when it comes to trying anything new. I am not comfortable with the unknown. I tend to linger with the things I am well accustomed to.

So, BJJ remained a nagging thought in the background of my subconscious, surfacing only every now and then. Fast forward four-ish years and my annual search of “Brazilian Jiu Jitsu near me” came back with “Lightning Kicks Martial Arts Academy”. The gym was close by AND offered a free trial class. I mentioned it to my three kids and two of them said they’d do it with me. Perfect. Now, I could say with an exasperated sigh, “yeah, I’m just here for my kids”, in the event I’m the worst Jiu Jitsu student the sport has ever seen. I signed the three of us up online…. and approximately 72 hours later, they bailed on me. Traitors.

So, off to class with no side-kicks in tow and no cover story. My over-anxious brain kicked into high gear- What if I can’t find a place to park? What do I do when I get inside? Where do I go once I get inside? What if they don’t know I’m coming because there was a glitch in the computer system and I was never registered in the first place? WHAT IF I’M NOT GOOD AT IT?

I tried to squash the endless rattle of anxious thoughts and slap on a layer of outward confidence as I walked through the door (my “outward confidence” face is frequently described by friends as raging RBF- possibly something I should work on, so anyone that maybe experienced this face firsthand, just know that I was attempting to appear wholly confident with emotions in check.) However, as soon as I walked in the door, my presence was immediately acknowledged and no one seemed to be confused as to why I was there, so clearly the computer must have been working. Dodged a bullet on that one. Professor Amir introduced me to the class and directed me to take up any open spot on the mat. Dodged another bullet.

As we worked our way through the warm-up and drills, my anxiety level dissipated to level zero, despite being the only girl there (full transparency- I’m 40 years old, I think that technically makes me a lady but I will milk this for what it’s worth). Warm-up, drilling new skills, and rolling. The class was challenging, but not punishing. There was a relaxed atmosphere, but still clearly organized. There was a sense of camaraderie among those in attendance that I was drawn to. I learned in that brief sixty minutes that I liked BJJ. I liked it a lot. I liked it enough to want to come back and learn more.

Before I left, tired and sweaty, but also excited, I asked about membership and signed on the dotted line. I opted for three months over twelve just in case I blew out an ACL on day two, or there were no more available parking spots by day ten. I walked out of the gym with a brand new gi coupled with a sense of accomplishment and an idea that there were even better things to come. Lightning Kicks for the win.