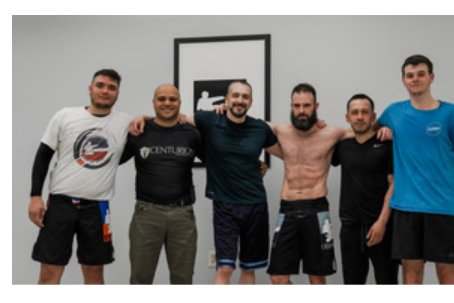 One of the most powerful moments of my life was hearing another grown man tell me he loves me. I still remember it like it was just yesterday and it happened here at Lightning Kicks. I was in the midst of a fight camp for my first MMA fight. The weeks were going by and the training was becoming increasingly more intense and difficult and I was surrounded by a group of men who were determined to get the best out of me.

There was one particular practice that I will never forget because it took me to my perceived limitations and my teammates made it possible for me to get there. There was a certain drill Master Amir had me executed, which involved ten minutes of takedowns. The only catch is, I was in the middle and my teammates were rotated in for the drill after a takedown was secured by myself or my teammate. One after another, for 10 straight minutes, at the end of an already grueling practice, and they were instructed to really take it to me. I had to be ready for anything in my upcoming fight and each of my teammates felt a moral obligation to not feel sorry for me and not given into my look of exhaustion and fatigue. It was their role to get me to push past this level of exhaustion, push back the “quit button,” as Master Amir liked to call it.

It was meant to be pure hell and my teammates did not disappoint, but there was one teammate in particulate who stood out, who was really cheering me on in the midst of sucking the life out of me. He had a strong wrestling background and would stuff my every attempt, and after we fought long and hard he would give it to me and put me on my back, all the while speaking to me, “You’ve got this Tanner, don’t give up! I believe in you!” I was so glad he believed in me, because I was beginning to lose belief in myself and it took a very special person to show compassion and intolerance at the same time.

They all rotated in and came at me like I stole their lunch money, no lie. “What’s wrong with these guys? Can’t they see that I’m dying?” Yes, they absolutely could see that I was dying and did everything they could to force me to push through it, force me to push myself, to grow as a fighter and as a man.

Finally, the bell rung and the exercise was over, and Master Amir came and held me up and I belted out a deep primal scream of victory for surviving the impossible. And my teammate who balanced compassion and intolerance so perfectly, who refused to let me feel sorry for myself and help me reach past a limitation that no longer existed gave me a huge bear hug and said, “I love you, brother!”

The fight ended up getting cancelled to due the COVID outbreak, but even if I knew it was going to be cancelled I would have continued the fight camp anyway, if for no other reason than to create that moment, that rare but beautiful moment where one grown man isn’t ashamed to tell another that he loves him.

This is something that isn’t very common, at least anymore. Men used to embrace each other affectionately and pour their souls to one another and created unbreakable bonds that would ensure they would always hold the line for one another. No matter what, until the end he was there for you.

But unfortunately times change, and for whatever reason there are very few men who can boast the depth and richness of a relationship with another man who openly tell each other they love one another. There are many reasons for this that I won’t go into, but here is a great article I recommend reading for a few powerful insights. What I will go into is the healing value of strong friendships which seem so elusive to the modern man. Research from the Mayo Clinic have shown that strong friendships have significant physical and mental health benefits that everyone should take advantage of.

It can be difficult for most men to form strong bonds. Most men work in cubicles all day and tend to their family all night. Those who go to the gym typically work out by themselves and I think most men would admit the average conversation with their friends never goes much deeper than discussing what is on t.v. This is an absolute tragedy, and it seems that unless you have served in the military or in law enforcement there is lacking meaningful experiences to bond men. It is my belief that the environment created at Lightning Kicks and other martial arts academies creates the perfect environment for male bonding. The discipline of combat coupled with the rigorous practices and comradery can create a very special bond between any group of individuals and I have found that to be especially true with the men I’ve grown to love at Lightning Kicks.

If you are in the Kalamazoo or Portage area and feel like something is missing in your life, please come visit us sometime. We’d love to have you as a part of our community.