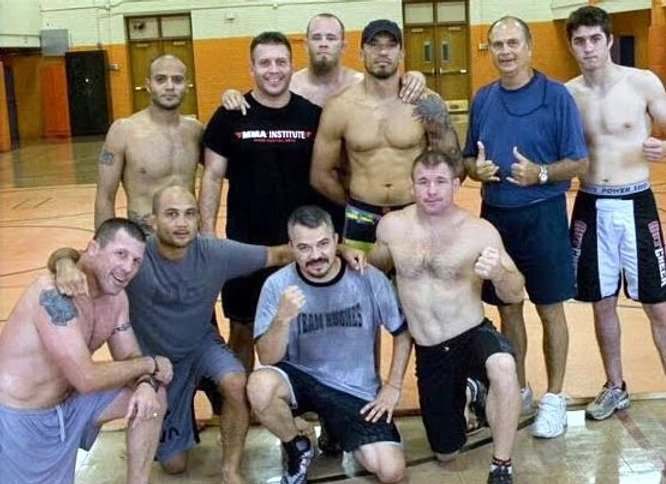 I grew up renting UFC VHS tapes on Fridays from our local video store. It had to be Fridays because I got out of school early on Fridays and had about two hours to rent and watch the fights. It would have been the end of me if my parents found out I was “watching that stuff.”

Eventually I discovered this one fighter named Matt Hughes. The guy was a stud. He eventually would go on to be the nine time UFC champion. If you were a fan of mixed martial arts (MMA) in those days, you were probably a fan of this guy.

Fast forward a few years later, there was a new organization called the IFL (International Fight League). This new organization was team based and was also doing open tryouts. I looked up the nearest location for a tryout and headed to Chicago. To my surprise, one of the coaches there that was scouting was Coach Pat Miletich. This guy was a legend, he also happened to be Matt Hughes’ coach. To my dismay Coach Miletich picked me and it was my big break! I made the big leagues, I was set, this was it, and then the IFL folded.

It was a crushing blow, one of many that I would endure my career. However, it was also a blessing, a short time later, Matt Hughes, opened his own team, the HIT Squad, based out of Granite City, IL. I was lucky enough to make the team, and get an athlete contract. We lived on an old military base, trained on base, and slept in the old barracks. We trained every morning and every evening, and we got paid to do it.

My time as a HIT Squad member is where I discovered the true meaning of jiujitsu. Being a “non-wrestler” in a room full of All-Americans, not to mention the UFC Welter Weight Champion, it would be safe to say, I got CRUSHED on a daily.

Picture the biggest guy you’ve ever rolled with, add a ton of skill, and about another 100 pounds, that’s kind of what it feels being under Hughes. Disheartening is an understatement. Initially I loathed that feeling. I got frustrated, I got discouraged, I got scared, and then I realized the most important lesson of jiujitsu.

This lesson has saved my life on the streets, has given me a fair amount of success in the cage, has shaped my business decisions, and influences the way I deal with people on a daily basis.

What is this lesson? Well, its a little difficult to articulate, but I’ll give it a shot. The words that most closely fit what I’m thinking of are: acceptance, non-resistance, and zen.

I’m sure you’ve heard this saying before, “life is 10% what happens to you, and 90% what you make of it.” Nothing throws my OCD mind into a tail spin more than when people throw out random percentages in a conversation, it’s one of my biggest pet peeve’s. But try to stay with me and don’t get distracted by the percentages above.

When your opponent or life crushes you, you can spend energy and focus formulating an opinion and emotion about the tough spot you are in, or you can jiujitsu your way out. Focusing your energy into resolving the challenge instead of having an opinion our emotion about the challenge will yield much better results. You can live in the moment and address the current obstacle or you can stay caught up in the past, the mistake that brought you into this horrible position, which will keep you down and depressed. Or you can be overly concerned about what will happen if you are able to escape this position or worse, fail to escape because you are in fear of the next position, causing you anxiety and making you “frazzled,” yes, I’m aware that frazzled is not a technical term, but you know what I’m trying to say, I hope.

For me, jiujitsu teaches you how to live in the moment, address the problem at hand by logically allocating resources to said problem, and not spending any energy on things that will not help you improve your position. Cutting through the feelings, opinions, and emotions of a problem and dealing with the problem directly is what jiujitsu has taught me.

Some people think, “oh, you’ll never have to use jiujitsu.” It’s not true, I use jiujitsu everyday, maybe not in a physical way, but the jiujitsu mindset is something everyone can use. Especially post 2020.

If you live in the Portage or Kalamazoo area and want to discover jiujitsu and what it can do for you, come train with me at Lightning Kicks. Would love to share the lifestyle with you. Ask for Amir 😉