Martial Arts competition: Do I have to compete? 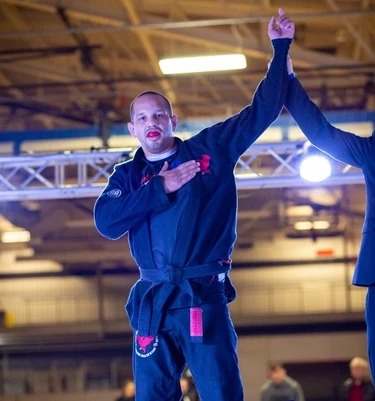 To compete or not to compete, that is the question.

As a life-long martial arts competitor in Taekwondo, Kickboxing, MMA, and Brazilian Jiu Jitsu (both GI and NOGI), I have a great appreciation for the benefits of competition. However, I also completely understand why someone may not want to compete or have their own child or student compete.

With such an exceptionally small percentage becoming elite level competitors, the likelihood of facing a loss at some point in your competition career can be tough on your ego. However, it is important to remember if you are at the correct belt level, your win/loss record should be close to 50/50 at least up to black belt. The mere thought of competing can increase anxiety in most people due to nerves of performance or the possibility of injury.  On the other hand, many competitors use competition to maintain psychological control over their own negative thoughts, emotions, or fears. We all have that internal battle with the voice in the back of our heads that tells us “you can’t do it”.

Competing will test your nerve and you must learn to conquer your fear.  Competition will take you outside of your comfort zone, letting you experience a higher level of nerves than is possible in a normal class, and testing your performance under pressure.  Once you get over the anxiety, competition has the benefit of helping you learn at a faster rate by going against people that you may not know their favorite moves and are much less predictable than your normal training partners.  You will also train at a much higher intensity level and get in much better shape leading up to your competition. Many also feel they need to control their weight to give them the best chance in their selected weight class.

One of the downsides of someone hoping to compete at the highest level is that there is not much monetary compensation for most martial arts competitions. There is also very little fame to be had for being the best at your chosen martial art.  Some might use Mixed Martial Arts (MMA) as the exception to these examples.  It is unlike many other sports, however, in that there are not many scholarships for martial artists like there are for many popular high school, college, or professional sports.

Many would argue that martial arts was not meant to be a sport anyway, and should be used purely for self defense (I dare say, fighting) purposes. The issue that I have with this argument is that a martial art that does not have a chance for its practitioner to compete is how many cult-like martial arts flourished, because their techniques and philosophies were never really tested in live sparring events against other trained individuals. With that being said, most, if not all, martial arts competition have a set of rules that do not reflect their original intention. For example, Judo was supposed to be a self defense martial art according to Jigoro Kano (the creator of Judo) but competition can not exactly reflect real life self defense situations. You can’t pull hair, use double leg take downs, etc. But, there is nothing like trying to throw someone who is also trying to throw you, and the same can be said about striking arts, or grappling. A live resisting partner also trying to apply their techniques against you is the best way to mimic the reality of a stressful self-defense/ combat situation.

Martial arts competitions are not immune to fairness issues as seen in many other sports such as “political” or bias towards an individual or team by referees, but of course there are always human judgment errors to consider.

However, there is a similarity to other sports in the bonding experience with teammates and even with opposing competitors.  Someone willing to take the risk of competing in a combat sport appreciates that their opponent is actually helping them to improve as a martial artist as well as testing themselves.  Traveling and competing seals the feeling of unity with your teammates and coach, by sharing the highs and lows of the emotional experience of competition.

There is also a level of satisfaction to be had by winning a medal or trophy or even a title.  However, none of these define you as a martial artist. A World Champion is likely to be more interested in the journey that brought him to his title and the struggle to get there, than he is at getting the gold medal itself.

There are also a variety of perspectives on whether or not to compete; those of the parents of a child who does martial arts, the school owner, and the adult participant of martial arts.

There are as many parenting styles as there are parents, so trying to pigeon-hole what every parent’s expectations are for their child wouldn’t be fair. We all want to protect our children from harm, but some feel that by allowing their child to compete in a controlled environment and test themselves with limited risk of injury (whether to their physical self or their feelings) helps to build the character of the child.  On the other hand, some parents are not willing to take even a negligible risk with their child being injured or seeing them cry over a loss and are averted to competition all together.

(Let’s skip the conversation of “participation medals” for this)

Some schools are known as ‘competitor schools’. These schools and their owners pride themselves on their medal count and titles that their students have accomplished.  While others have instructors that discourage it outright because they worry that a student may decide to quit because he/she gets injured or loses at a competition and becomes discouraged with martial arts all together. These instructors have decided that since a small percentage of students are even interested in competing and they believe that parents may be more interested in other things that martial arts has to offer. These instructors may choose to forgo pushing competition on their students hoping to save them from ever having to deal with the feelings that come with a potential loss and thus losing the child as a student.

Adults have the privilege / curse of being able to decide for themselves on whether or not to compete. These students have to balance the cost of the competition, the time cost of spending a day (or more) at a competition, the risk of injury that may take them away from their work, and the anxiety that they will inevitably deal with that comes with performing/ competing in front of others.

Competition is an individual choice and with all the benefits that I personally received from my years of competing, I do not think that it is necessary for everyone. I am lucky to train at a school where my instructor does not force anyone to compete and it holds no bearing on someone’s belt promotion. The instructor and the student body are proud of the accomplishments of our fellow classmates, but competition is not the foundation of the school. Competition can be a great addition to someone’s journey in the martial arts, but we all must take that journey ourselves, and decide what we are looking to get out of it. Sometimes competing is just not one of those things.

“I fight not only with my opponent….I fight with my demons of doubt, with my exhaustion, with my past failures, with my injuries, with that unrelenting voice that tells me to stop, but I am a fighter and one thing is certain… I will be victorious.”  I have this tattooed on my arm to help me with any struggle that I face in life as much as it does with competition.

Tom Lynn Jr is a husband and father of 3 daughters. He is a Physician Assistant in the Emergency Room in Miami, FL. He is a former professor of medicine. He has been practicing martial arts for over 30 years. He is a Brazilian Jiu Jitsu black belt under Michel “Buiu” Pereira  www.buiubjj.com and 5th degree black belt inTaekwondo. He was on the US National Taekwondo team and has competed in kickboxing and professional MMA.  He currently is the owner of Academy Martial Arts in Monument, Colorado monumemtjiusitsu.com