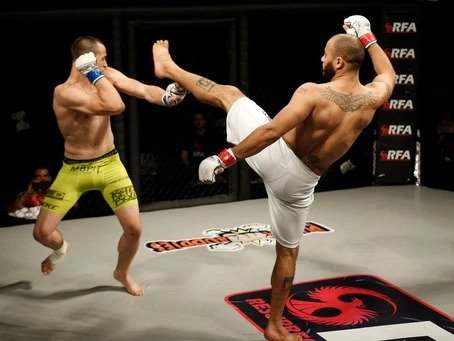 It was the pain. It consumed his every thought and could feel it reverberate down his spine and into his toes. It started off as a dull aching in his shoulder but by midday it turned into an avalanche of misery and he wasn’t sure what to do. Bomani was used to pain and could accept the unfortunate reality that life is pain, but it was 5 minutes before his big fight and it was too late to back out now. Or was it?

Bomani sat down in the locker room, hands trembling, teeth chattering, and brain exploding with the idea of what was to come in 5 minutes. He’d been through this process many times before, but with each passing fight his anxiety would rise further to unimaginable levels where he could barely move, barely breathe, barely exist. And yet somehow, he was supposed to transform into an unstoppable force of nature in the next 5 minutes, a force capable of brutalizing any man put in front of him. He was somehow supposed to become the essence of what he always stood against, what he hated: terror. In order for his gym to survive, his family to survive, he had to summon the terror from the great abyss of his being and take his first step towards the war ahead.

4 minutes to his fight and Bomani was still trembling on the floor, desperately looking for an exit, a way out. He had fought through injuries before, but as time passed nagging injuries became devastating and crippling and he much felt like a rag doll pieced together one limb at a time. But this rag doll was on its last leg and he could feel himself falling apart. He wanted nothing more than to curl up into a ball and somehow disappear. Forget the 8-week training camp, the 20-pound weight cut, and all the sacrifices he made to get to this point. And forget the fact that Bomani was a national champion martial artist who trained with the likes of Matt Hughes, BJ Penn, and Jeremy Horn. None of that mattered anymore. All that mattered was the excruciating pain in his shoulder and fear seizing his every thought. How was he supposed to compete as an elite fighter under these conditions? He tried to stand up, but his legs went completely numb, plummeting back to the locker room floor.

3 minutes out. Bomani finally managed to get to his feet but he couldn’t stop thinking about all his students at his martial arts gym he founded all those years ago. He thought about all the lives he had changed, the testimonies of students who were certain Bomani’s gym kept them off the streets, off drugs, and gave them a reason to live. He thought about all the children in his Little Warriors class, their smiles and the hope that seemed to explode from their chests with each word of encouragement and praise he gave them. He thought about the promise he made to himself all those years ago that he would build a gym that would support the most vulnerable in his community. And then he thought about the razor thin budget that his gym operated on and with each passing year the gym seemed to be more and more of a financial burden. He thought about the money he would earn from the fight, the potential bonus if he finished his opponent in the first round; just enough to make rent for the next few months. His students were counting on him to come through. He couldn’t afford to fail, couldn’t afford to be afraid.

2 minutes out. Bomani walked over to the bathroom sink to give himself a pep talk, but as he stared into his own eyes the tears began to slide down his cheek as the truth dawned on him; he was a fraud and had no business being the in the fight game. He realized that he didn’t have what it took, wasn’t strong enough, brave enough, or talented enough to fight and it was only a matter of time that his students discovered the truth. He desperately wished he were a million miles away in another world, a world without violence, pain, or fear. He wished that he never opened the gym in the first place and began to think about a succession plan, his exit strategy, and the exciting new life that could be waiting for him if he stepped down. But Bomani was jolted back to the present moment as he thought of his opponent: an undefeated fighter with 4 knockouts in the first round with a brown belt in jiu jitsu. Bomani desperately wished his soul could leave his body and he attempted to scream for help, but nothing came out of his mouth. He knew the pain and embarrassment that was on the immediate horizon and he leaned over the bathroom sink, buried his head into his arms and began to sob.

1 minute out. Bomani’s emotions had now past a threshold very few men knew existed, and he could feel the energy surge through his being like a bolt of electricity. Something had awakened inside him, a terrible, brutal, but very necessary force. The power of the pent up adrenaline and cortisol surging through his veins broke the chains and unleashed the Reaper that existed in the very depths of his psyche, and he found himself no longer sobbing, but instead found himself smirking, smiling, and laughing. But this was not a healthy or jubilant smirk, this was the laugh of a mad man who was all too eager to impose his will on his enemies, who enjoyed the taste of his own blood and that of his enemies and took the greatest pleasure in the chaos and brutality that was to come. For the Reaper was far from fair, for he reaped where he had not sown fed off the pain of others.

Bomani lifted his head from the sink and saw the man in the mirror, who was no longer Bomani, but the Reaper. And the Reaper gave the most devilish smirk and side smile to Bomani as if to say, “Thank you for unleashing me my friend.” And the Reaper spoke to Bomani, putting his finger to his lips, “Shhhhh. There, there, my friend. You need not worry any longer. I am leaving now to reap where I haven’t sewn, and it will all be over soon.” And with that Bomani’s coach alerted him the time had come, and the Reaper headed towards the harvest, doing the work that needed to be done in order for the gym to survive another day. * – Based off the life of my dear friend Amir Khillah