Why do I train Jiujitsu at Lightning Kicks? 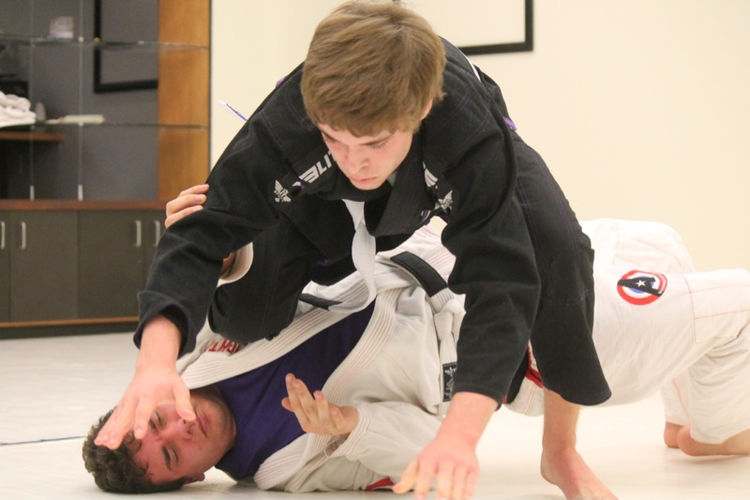 ​I’ve told a lot of people about training Brazilian Jiu Jitsu and kind of tinkering with MMA. First off, yes there is a difference between the two. MMA involves striking while BJJ does not. I’d be lying however, if I said that I have never taken an accidental kick to the face, knee to the side of the head, punch, so on and so forth, but that’s beside the point. 99% of the time this gets brought up in a conversation, it is usually followed up with the question, “Why? Why do you do a sport that the goal, essentially, is to hurt your opponent, while possibly getting hurt yourself?”

​To put it in simpler terms, the answer to that question is one you should hear from people who are dedicated to any sport; they love it. But, to further explain why I train Jiujitsu, also known as BJJ, I have to go back in time and explain where it all came from. So sit back, relax and take a trip down memory lane with me.

​When I was roughly a freshman, going on to sophomore year in high school, I was spending my summer in my dad’s condo in Northern California.

My great grandmother had recently passed away and had left 1,000 dollars to her great grandchildren to invest how they wish. Well one night, I was not able to fall asleep for whatever reason. I mean it was summer vacation and I didn’t have any responsibilities anyway, but this particular night, staying up wasn’t exactly on the docket. Well while I was browsing MySpace (yes I lived through the old glory days of MySpace), and watching TV, I flipped the channel on accident to SpikeTV and sure enough, the TV program that was on was the UFC’s 100 Greatest Knockouts. Up until this point, I knew of the UFC, but didn’t really have any interest or penchant to dabble in the sport myself. But fight after fight, I realized that I was focusing less on the computer and more on the fights; the brutal knockouts, the technical groundwork, the powerful takedowns and slams. Pretty soon I was hooked on what I was watching and was researching almost every fighter that came up. I thought to myself, “you know, those guys started somewhere at once, not knowing what to do, why can’t I?” All of a sudden BOOM, I had an epiphany. I am in possession of 1,000 dollars and can invest that money where I so choose. Immediately I began looking for MMA [mixed martial arts] gyms where I lived (Arizona at the time) and stumbled upon one called the MMA Lab.

​To make a long story short, I began training Brazilian Jiu Jitsu at the age of 15. I was going almost every day, training for about 2 hours. If you read one of my previous blogs about dedication, it explains a little about my journey into the BJJ [Brazilian JiuJitsu] world. As I got older, the responsibilities started piling on and soon enough it was time for me to leave Arizona for a brief stint in college, effectively ending my BJJ [jiu-jitsu] training for a while.

​Let’s fast forward a few years now. I’m 22 years old, a United States Navy Corpsman in the Reserves, and I am moving out for the first time to Kalamazoo, Michigan. When I finally settled, I started my search once more to find an MMA [mixed martial arts] facility where I can train. It so happened that close by, was a gym called Lightning Kicks Martial Arts Academy that has been open and in operation since 2001 and run by the same owner, former Bellator and UFC fighter Amir Khillah. Now initially I will admit skepticism when going to a brand new gym; I knew nobody, nobody knew me, and at the time the class was very small. However, as the days went by, and I kept training, I started forming a bond with the other members, eventually growing into friendships. After about three years and one deployment, the gym moved to a new location in Portage, a bit farther from my house. Yet there I was, walking into the new location, ready for more. It’s been about 4 years since I first stepped into Lightning Kicks, and the training isn’t slowing down, and neither is my commitment to train.

​Now that memory lane has come to an end, I bet you’re still wondering why I train. Well the answer, like I said, is simple enough. I love doing what I do. Brazilian Jiu Jitsu gives you a certain feeling of accomplishment that I, personally, feel like you can’t get in any other sport. What does that mean exactly? Well let me explain it like this: Imagine participating in a sport that no matter how advanced you are, you can always improve. No disrespect to other sports, but I don’t think there are too many ways one can hit a golf ball, shoot a basket, score a goal, or hit a home run. It’s pretty self-explanatory right? In BJJ, you can flip, roll, crawl, squirm, rotate, and just about do anything and escape a submission attempt. Best part? A lot of times, there isn’t even an official name for a lot of moves people randomly pull off.

​But what else? That’s not enough to make someone love a sport right? Yeah, you’re probably right. Like I said, there’s a certain aura to BJJ that you can’t find in other sports. Take discipline for example. If someone is disrespectful in basketball, what do most people do? Do something that embarrasses them right? Shoot a three point shot right in front of their face, hypothetically “break” their ankles? All pretty humiliating but people can bounce back from that, no pun intended. Even then, at the end of the day, whoever got humiliated at that time can still come back and win the game right?

​Well in BJJ, things are a little different because it’s a contact/combat sport. You can come into our school all you want, run your mouth, and I guarantee you, you will get humbled very quickly. Now that isn’t a threat. It is basic human hubris that everybody falls into. A lot of people see BJJ as a fancy form of wrestling when it is far from it. Trust me when I say, I’ve seen people come into a BJJ class thinking they’re going to mop people up, but newsflash, they don’t hold up very well. After BJJ you will literally have pain in places you didn’t even know could hurt; you will get choked with the most asinine ways possible; you will literally end every roll thinking “how the hell did that even happen?” to be honest it is perfectly normal to think that way.

​Still haven’t answered your question? That’s ok. Hopefully this will tie everything together.

I train Brazilian Jiu Jitsu because it is an art that, while you’re actively working to submit your opponent, you’re also actively working to defend yourself from their submission attempts as well, and believe me it is not as easy as it sounds. Think of it as human chess; you have got to think 3 or 4 moves ahead in order to survive. Going up against a more advanced practitioner, you have to think 7-8 moves ahead. It’s a constant flow of movements where if you hesitate even for a moment, you lose.  It gives you a feeling of excitement, wonderment, and accomplishment. Have I mentioned camaraderie? The friendships you can create in Jiu Jitsu rival sports teams. Why? Because in your own home gym, everybody builds each other’s confidence level up. When a competition comes around, everyone cranks training to 110% so that they can feel mentally and physically prepared for their match. To be frank, you can’t find that in a lot of sports because most of them are team sports where everyone has to work hard to win. In BJJ it’s one on one. I don’t want to sound harsh but the team doesn’t lose, you lose, which can bring a lot of negative emotions to yourself and bring your self-esteem down. It’s your team, and your sport that bring you out of it. You lose a match, I can guarantee you, your teammates will be there right at the end of your match offering you encouragement, and insights to your match the next time you go to the gym.

​I’ve made a lot of points in this blog about why I train. Albeit scattered, it’s to show you what training Brazilian Jiu Jitsu is like. You will come to points in your training where you don’t know why you’re there getting beat up. But trust me when I say this, you will want more. You’re going to see something that looks cool, or something that can help you in your profession if you work in a field like law enforcement. You’re going to hear stories from Black Belts that started their journey years ago that’ll leave you in awe. All this is why I train. I want to learn more; I want to know more. I’m not trying to be the greatest BJJ Practitioner on Earth.  I just want to be good enough by my standards. It’s that motivation that keeps me coming back for more.

So let me ask you something, why do you train?

“I hated every minute of training, but I said ‘Don’t quit. Suffer now and live the rest of your life as a champion’.”